You are here: Home › The Hotel › History

Taagepera is the last Estonian manor – a castle, that is situated far on the Latvian border, more than two hundred and fifty kilometres from Tallinn, the capital. Taagepera is the starting point for ancient forests, thick meadows filled with mystery and poetry. Traveller, who has wandered off the main road, will find himself under a grand arch gate, where he will notice the manor, rising up on the hill as a rock; the stairway hall will lead him to the tower, the glance from which assures – you have arrived at fairytale land. The rocks that were needed to build the castle seem as if the had been carried to the top of the hill by Scandinavian trolls with the grout being mixed by grey-haired witches.

Different parts of the building emerge from each other like forms of nature, providing a base for the unusal manor house which in its architectural style seems to resemble more Finnish national romanticism than Baltic building traditions.

Taagepera seems carries the conviction of being exceptional, and that exceptionalism has been explained in several ways, e.g. In 1922, newspaper „Vaba Maa“ wrote:

„The castle has been built after the 1906 revolution period, with a strong and certain plan as a stone wreck  – a certain citadel and shelter from the revolutionists as bullets starts to fly and looting begins.“ 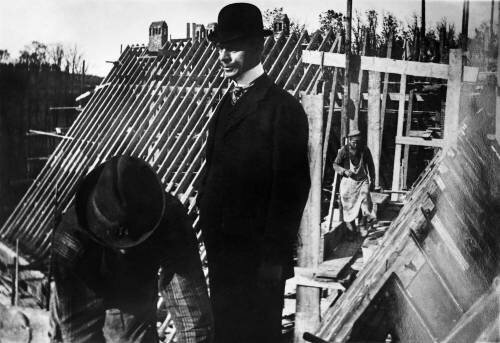 Hugo Ferdinand Bernhard von Stryck, the last owner of the manor, was a peculiar man, who, before the doom and end of another era as if to defy everything that had been or was going to be, had himself built an enormous house that comes off as a medieval stronghold, which is emphasized by the choice of material: robustly broken granite with rough plaster and scaly salte.

It is already at the monumental gate that one’s eye catches sight of the powerful 40-m high tower, numerous gables, erkers, balconies and sturdy chimneys, The exterior of the building is almost free of any symmetry. The extravagant, archaic approach of the Art Nouveau period is also reflected inside the castle. The interior is complemented by dark -tiled fireplaces. There was great debate about the identity of the archictect of the castle. Today we know that both Taagepera and Holdre manor were designed by Otto Wildau (1873-1942). Manor owner Hugo von Stryk did not spare a dime when the castle was built. Building material was brought here on horses even from Riga.

During the Polish and Swedish reign until 1674, the manor belonged to the Rehbinder family. From 1674-1806, the manor owner was land adviser Otto von Stackelberg, who was followed by Friedrich Joachim von Oettingen from 1806-1819. Since 1819 until the Estonian removal of land under the Land Act the manor was the property of the von Stryck family. This is also the family who gave Taagepera its name. The original Estonian name „Vaoküla“ has been preserved in a slightly altered form in the manor’s German name Wagenküll.

The favourite place for the Lady of the Manor was to sit on the small balcony and smoke pipe. The lady had long dark hair and she would hear a long purple dress and slippers with their noses curled upwards.

Her second favourite place in the castle was in the Lord’s study, where her hair would swing and the tail of her long purple dress would flow as she moved. Meanwhile, she also loved to meditate in the room with the interior balcony.

The Lord of the Manor, on the other hand, always wore a hat and a long beard. He even had a car, but since Hugo did not have a driver’s permit, their Latvian-born valet was sent to school and so he became the chauffer.

Why did they build the castle tower that high? Hugo loved his wife very dearly and he wished she could admire both the sunrise and sunset. From the tower, Anna Sophie could also get an overview of the peasants working in the field. She is said to have been very demanding and harsh with skivers; those who stretched their backs without reason also deserved their punishment.

The size of the castle has to do with the all the gold belonging to the Lord of the Manor. He was said to have so much of it that the bank had issued he did something very grandeur – so the castle was built. Another legend says that the lord had wagered to build something grand for his gold, so that is how the grand castle came to be.

The baroness is said to have loved the coulour gray. Her first servants used to wear grey uniforms. Her favourite flowers were roses and the lady adored children. She had been the founder of a school for worker’s children where they could learn to write and read. The lady would make sure her workers’ dwellings and gardens were always impeccable. The park had many flowers and flower beds, thousands of different trees and bushes which were labled. Unfortunately, they all have been destroyed.

The lady would always be accompanied by a little monkey who she kept as a pet. At Christmas, a party was held for all the workers’ and maids’ children and lady of the manor would give everybody a gift. The went hunting and also invited the lord and lady of the Holdre manor to come along.

Cemetry was a very sacred and respected place. Unfortunately, the first ones to loot it were Russian soldiers who even broke off gate knobs hoping they were made of silver.

Estate owner Hugo von Stryk built the Taagepera castle in 1907 from stone because the last two wooden manors that had existed on that location had burned down.

Several historians spoke of the fact that the reason why the manor was built was that the town-loving upringing and evidently an alcoholic lord would only receive his relative’s heritage if he built a castle like this. The heir to the will had tried everything to drink up what was left to him and therefore he even had problems with the supervision of the will (written by A. Liiv).